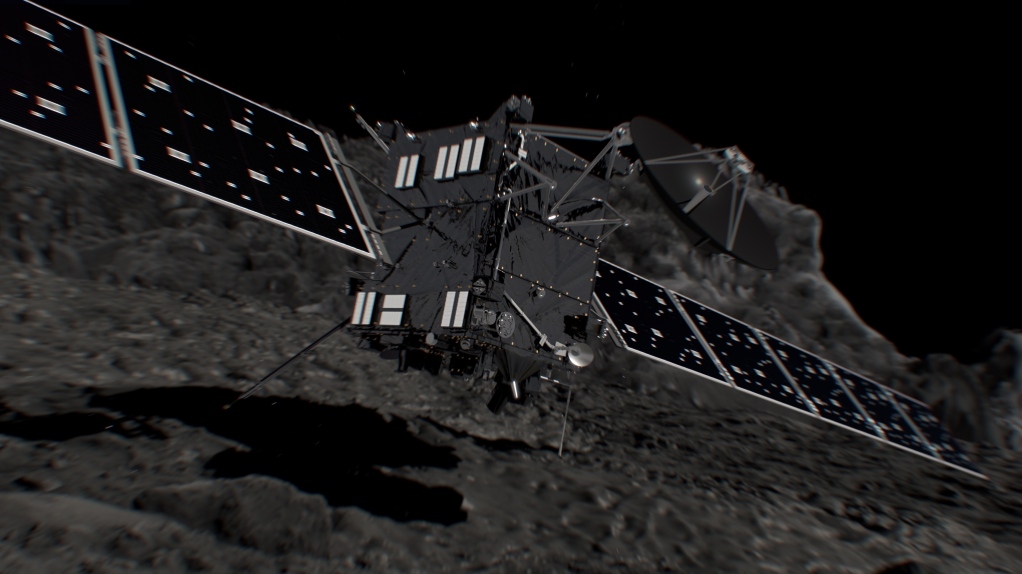 NASA Television and the agency’s website will air the conclusion of ESA’s (European Space Agency’s) Rosetta mission from 6:15 to 8 a.m. EDT Friday, Sept. 30, with NASA commentary, interviews and analysis of the successful mission. The Rosetta mission will end with the controlled decent of the spacecraft onto the surface of comet 67P/Churyumov-Gerasimenko at around 7:20 a.m.

From 8:15 to 10:15 a.m., NASA scientists and engineers involved in ESA’s Rosetta mission will be available for live broadcast interviews from the European Space Operations Center in Darmstadt, Germany. To schedule an interview, contact Mark Petrovich at 818-393-4359 or mark.petrovich@jpl.nasa.gov.

The spacecraft arrived at its destination comet on Aug. 6, 2014, becoming the first mission in history to rendezvous with a comet and escort it as it orbits the sun. About two months later, the small Philae lander deployed from Rosetta touched down on the comet and bounced several times before alighting on the surface. Philae obtained the first images ever taken from the surface of a comet, and sent back valuable scientific data for several days. ESA is ending the mission because the spacecraft’s ever-increasing distance from the sun has resulted in significantly reduced solar power to operate the spacecraft and its instruments.

Comets are time capsules containing primitive material left over from the epoch when the sun and its planets formed. Rosetta is the first spacecraft to witness up close how a comet changes as it is subjected to the increasing intensity of the sun’s radiation. Observations will help scientists learn more about the origin and evolution of our solar system and the role comets may have played in the formation of planets.

The landing coverage will also be streamed live at: http://www.ustream.tv/nasajpl2

For more information on the U.S. instruments aboard Rosetta, visit: http://rosetta.jpl.nasa.gov