Below is a comprehensive list of both NASA’s main or featured Apps available for mobile users.
Along with the featured apps, NASA also has numerous apps for everything from other facilities to current space exploration projects, live views of the Sun and Mars rover.
The list is long, and is organized by topic. So you can connect with NASA and even collaborate with them on projects that they are asking the public to participate in to the status and history of almost every satellite and unmanned exploration, including NASA’s future goals and timetables.
If you are looking just to collaborate with NASA on projects requesting the public’s health, click here to: NASA’s Social Media Mega Page (Follow Every Project, Department, Mission and Individual Astronauts)
So review the list and connect with NASA with your tablet or phone on the topics you are interested in.
This list came from the NASA website, and I will review this page from time to time and make any updates. (Updated January 20, 2019 at 7:30 pm) 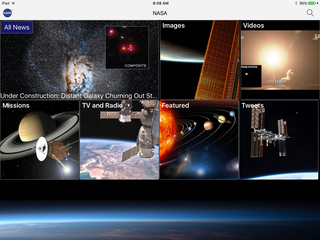 Amazon Fire TV: Please go to the App Store on your Fire TV device to install.

Apple TV: Please go to the App Store on your Apple TV device to install.

Roku: Add the NASA channel in the Roku channel store.

The new NASA Selfies app lets you generate snapshots of yourself in a virtual spacesuit, posing in front of gorgeous cosmic locations, like the Orion Nebula or the center of the Milky Way galaxy. The simple interface means you just snap a photo of yourself, pick your background, and share on social media.Get the iOS app Get the Android app

In NASA’s Exoplanet Excursions virtual reality app, VR users are taken on a guided tour of the TRAPPIST-1 planetary system. TRAPPIST-1 is the only known exoplanet system to host seven roughly Earth-size planets. The VR app is available for Oculus and Vive.Exoplanet Excursions downloadsYouTube: 360-degree video of virtual TRAPPIST-1

Get the app for Android

NASA Spinoff profiles the best examples of technology that have been transferred from NASA research and missions into commercial products. From life-saving satellite systems to hospital robots that care for patients and more, NASA technologies benefit society. There’s more space in your life than you think!Get the iPad app Related:  Technology Innovation iPad app

The 3DV mobile app allows you to examine several of NASA’s Deep Space Exploration projects that will take our space program to the Moon and Mars, and destinations beyond.Read MoreGet the iPhone/iPad appGet the Android app

Other NASA Apps by Topic:

Technology
Technology Innovation features the latest space technology innovators and project developments across the agency, highlighting the American inventors, entrepreneurs and application engineers who have transformed space exploration technologies into products that benefit the nation.

NASA Patent Portfolio
Did you know NASA has over a thousand technologies available for licensing? A NASA technology might be the solution to your business’ technical challenge. Use this app to browse our wide and varied portfolio of inventions and learn how to partner with us.

Get the iPad app

One thought on “Mobile Apps – Connect and Collaborate With NASA Projects”