Uranus May Have Two Undiscovered Moons

NASA’s Voyager 2 spacecraft flew by Uranus 30 years ago, but researchers are still making discoveries from the data it gathered then. A new study led by University of Idaho researchers suggests there could be two tiny, previously undiscovered moonlets orbiting near two of the planet’s rings.

Rob Chancia, a University of Idaho doctoral student, spotted key patterns in the rings while examining decades-old images of Uranus’ icy rings taken by Voyager 2 in 1986. He noticed the amount of ring material on the edge of the alpha ring — one of the brightest of Uranus’ multiple rings — varied periodically. A similar, even more promising pattern occurred in the same part of the neighboring beta ring.

“When you look at this pattern in different places around the ring, the wavelength is different — that points to something changing as you go around the ring. There’s something breaking the symmetry,” said Matt Hedman, an assistant professor of physics at the University of Idaho, who worked with Chancia to investigate the finding.

Their results will be published in The Astronomical Journal and have been posted to the pre-press site arXiv.

END_OF_DOCUMENT_TOKEN_TO_BE_REPLACED

Humanity has visited Uranus only once, and that was 30 years ago. NASA’s Voyager 2 spacecraft got its closest look at the mysterious, distant, gaseous planet on Jan. 24, 1986.

Voyager 2 sent back stunning images of the planet and its moons during the flyby, which allowed for about 5.5 hours of close study. The spacecraft got within 50,600 miles (81,500 kilometers) of Uranus during that time.

“We knew Uranus would be different because it’s tipped on its side, and we expected surprises,” said Ed Stone, project scientist for the Voyager mission, based at the California Institute of Technology, Pasadena. Stone has served as project scientist since 1972, continuing in that role today.

Uranus revealed itself to be the coldest planet known in our solar system, even though it’s not the farthest from the sun. This is because it has no internal heat source.

Scientists determined that the atmosphere of Uranus is 85 percent hydrogen and 15 percent helium. There was also evidence of a boiling ocean about 500 miles (800 kilometers) below the cloud tops.

Scientists found that Uranus has a magnetic field different from any they had ever encountered previously. At Mercury, Earth, Jupiter and Saturn, the magnetic field is aligned approximately with the rotational axis.

“Then we got to Uranus and saw that the poles were closer to the equator,” Stone said. “Neptune turned out to be similar. The magnetic field was not quite centered with the center of the planet.”

This surface magnetic field of Uranus was also stronger than that of Saturn. Data from Voyager 2 helped scientists determine that the magnetic tail of Uranus twists into a helix stretching 6 million miles (10 million kilometers) in the direction pointed away from the sun. Understanding how planetary magnetic fields interact with the sun is a key part of NASA’s goal to understand the very nature of space. Not only does studying the sun-planet connection provide information useful for space travel, but it helps shed light on the origins of planets and their potential for harboring life.

Voyager 2 also discovered 10 new moons (there are 27 total) and two new rings at the planet, which also proved fascinating. An icy moon called Miranda revealed a peculiar, varied landscape and evidence of active geologic activity in the past. While only about 300 miles (500 kilometers) in diameter, this small object boasts giant canyons that could be up to 12 times as deep as the Grand Canyon in Arizona. Miranda also has three unique features called “coronae,” which are lightly cratered collections of ridges and valleys. Scientists think this moon could have been shattered and then reassembled.

Mission planners designed Voyager 2’s Uranus encounter so that the spacecraft would receive a gravity assist to help it reach Neptune. In 1989, Voyager 2 added Neptune to its resume of first-ever looks.

“The Uranus encounter was very exciting for me,” said Suzanne Dodd, project manager for Voyager, based at NASA’s Jet Propulsion Laboratory, Pasadena, California, who began her career with the mission while Voyager 2 was en route to Uranus.” It was my first planetary encounter and it was of a planet humanity had never seen up close before. Every new image showed more details of Uranus, and it had lots of surprises for the scientists. I hope another spacecraft will be sent to explore Uranus, to explore the planet in more detail, in my lifetime.”

Voyager 2 was launched on Aug. 20, 1977, 16 days before its twin, Voyager 1. In August 2012, Voyager 1 made history as the first spacecraft to enter interstellar space, crossing the boundary encompassing our solar system’s planets, sun and solar wind. Voyager 2 is also expected to reach interstellar space within the next several years.

The Voyagers were built by JPL, which continues to operate both spacecraft. JPL is a division of Caltech. For more information about the Voyager spacecraft, visit: http://www.nasa.gov/voyager and http://voyager.jpl.nasa.gov 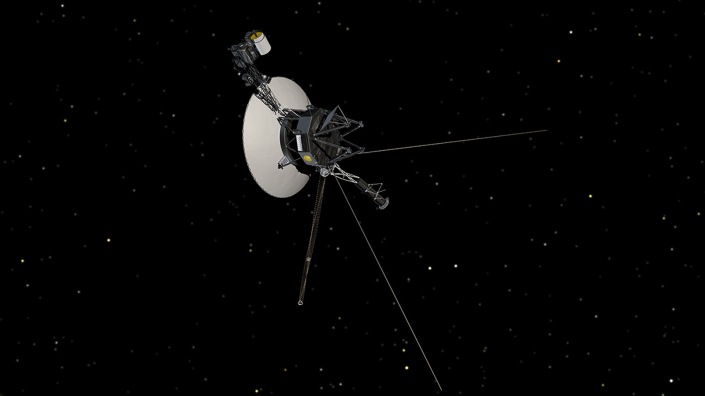 NASA’s Voyager 1 spacecraft made history in 2012 by entering interstellar space, leaving the planets and the solar wind behind. But observations from the pioneering probe were puzzling with regard to the magnetic field around it, as they differed from what scientists derived from observations by other spacecraft.

A new study offers fresh insights into this mystery. Writing in the Astrophysical Journal Letters, Nathan Schwadron of the University of New Hampshire, Durham, and colleagues reanalyzed magnetic field data from Voyager 1 and found that the direction of the magnetic field has been slowly turning ever since the spacecraft crossed into interstellar space. They believe this is an effect of the nearby boundary of the solar wind, a stream of charged particles that comes from the sun.

“This study provides very strong evidence that Voyager 1 is in a region where the magnetic field is being deflected by the solar wind,” said Schwadron, lead author of the study.

Researchers predict that in 10 years Voyager 1 will reach a more “pristine” region of the interstellar medium where the solar wind does not significantly influence the magnetic field.

Voyager 1’s crossing into interstellar space meant it had left the heliosphere — the bubble of solar wind surrounding our sun and the planets. Observations from Voyager’s instruments found that the particle density was 40 times greater outside this boundary than inside, confirming that it had indeed left the heliosphere.

But so far, Voyager 1’s observation of the direction of the local interstellar magnetic field is more than 40 degrees off from what other spacecraft have determined. The new study suggests this discrepancy exists because Voyager 1 is in a more distorted magnetic field just outside the heliopause, which is the boundary between the solar wind and the interstellar medium.

“If you think of the magnetic field as a rubber band stretched around a beach ball, that band is being deflected around the heliopause,” Schwadron said.

In 2009, NASA’s Interstellar Boundary Explorer (IBEX) discovered a “ribbon” of energetic neutral atoms that is thought to hold clues to the direction of the pristine interstellar magnetic field. The so-called “IBEX ribbon,” which forms a circular arc in the sky, remains mysterious, but scientists believe it is produced by a flow of neutral hydrogen atoms from the solar wind that were re-ionized in nearby interstellar space and then picked up electrons to become neutral again.

“All of these different data sets that have been collected over the last 25 years have been pointing toward the same meeting point in the field,” Schwadron said.

Over time, the study suggests, at increasing distances from the heliosphere, the magnetic field will be oriented more and more toward “true north,” as defined by the IBEX ribbon. By 2025, if the field around Voyager 1 continues to steadily turn, Voyager 1 will observe the same magnetic field direction as IBEX. That would signal Voyager 1’s arrival in a less distorted region of the interstellar medium.

“It’s an interesting way to look at the data. It gives a prediction of how long we’ll have to go before Voyager 1 is in the medium that’s no longer strongly perturbed,” said Ed Stone, Voyager project scientist, based at the California Institute of Technology in Pasadena, who was not involved in this study.

Voyager 1 and Voyager 2 were launched 16 days apart in 1977. Both spacecraft flew by Jupiter and Saturn.

Voyager 2 also flew by Uranus and Neptune. Voyager 2, launched before Voyager 1, is the longest continuously operated spacecraft. Voyager 1 is the most distant object touched by human hands.
JPL, a division of Caltech, built the twin Voyager spacecraft and operates them for the Heliophysics Division within NASA’s Science Mission Directorate in Washington.
For more information about Voyager, visit: http://voyager.jpl.nasa.gov

NASA Awards Radiation Challenge Winners, Next Round Seeking Ideas for Protecting Humans on the Journey to Mars

NASA awarded $12,000 to five winners of a challenge to mitigate radiation exposure on deep space missions and launched a new follow-on challenge to identify innovative ways of protecting crews on the journey to Mars.

The follow-on challenge offers an award of up to $30,000 for design ideas to protect the crew on long-duration space missions. Anyone can participate in the challenge, which will be open Wednesday, April 29 through Monday, June 29, 2015.

“We are very impressed with the enthusiasm and sheer number of people from the public who showed interest in solving this very difficult problem for human space exploration,” said Steve Rader, deputy manager of the Center of Excellence for Collaborative Innovation. “We look forward to seeing what people will come up with in this next challenge to find the optimal configuration for these different protection approaches.”

Galactic cosmic rays (GCRs), high-energy radiation that originates outside the solar system are a major issue facing future space travelers venturing beyond low-Earth orbit. These charged particles permeate the universe and exposure to them is inevitable during space exploration. Because missions to Mars will require crews to remain beyond the protection of Earth’s magnetic field and atmosphere for approximately 500 days and potentially more than 1,000 days, learning how to protect human explorers from the effect of exposure to GCRs is a high priority.

While the five winners selected in the first challenge did not identify a solution that ultimately solves the problem of GCR risk to human crews, the first place idea did provide a novel approach to using and configuring known methods of protection to save substantial launch mass and lower launch costs over multiple missions. The other winning submissions all provided solid proposed configurations on known approaches and were supported with sound engineering and mathematics.

NASA’s goal is to identify key solutions that will reduce crew members’ total radiation dose from exposure to GCRs on long duration deep space missions by at least a factor of four.

In a continued effort to achieve that goal, the agency has developed a second challenge that asks the public for ideas on optimal configurations of active and passive solutions to provide crew members maximum protection. Active protection uses magnetic or electrostatic fields to deflect the harmful radiation, while passive protection uses material layering to shield the crew from the GCRs.

These challenges are managed by the Center of Excellence for Collaborative Innovation (CoECI). CoECI is a multi-center organization established at the request of the White House Office of Science and Technology Policy to advance NASA’s open innovation efforts and extend that expertise to other federal agencies. CoECI is directly supported by the Human Health and Performance Directorate at NASA’s Johnson Space Center in Houston. The challenges are hosted on the NASA Innovation Pavilion through its contract with InnoCentive, Inc.

To participate in the challenge beginning April 29, visit:

For additional information about the galactic cosmic ray challenges, visit: